http://www.lacigale.fr/spectacle/dave-gahan-soulsavers/
Parmi nos prochains concerts  ! Now in our next concerts for this year, seeing Mr Gahan solo with Soulsavers it may be interesting ! 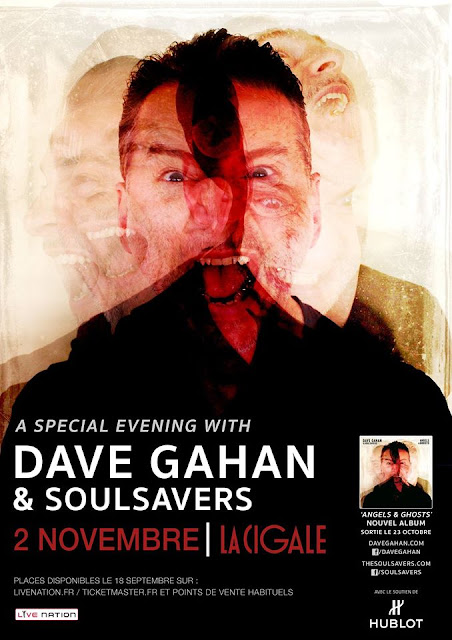 The album launches today with the
online premiere of the moody, cinematic anthem “All of This and
Nothing”, on VEVO. The track can be streamed here: http://smarturl.it/allofthisandnothing

An
evolution from their first album, ‘Angels & Ghosts’ proves to be a
markedly stronger and more hard-hitting body of work. Listeners can
expect to be led through an aural mix of dark, brooding sounds, elements
inspired by gospel and blues, and the stark beauty that has become a
signature of Dave and Soulsavers’ works. Dave Gahan’s emotionally
powerful voice has never sounded better, and drives the album forward
over a landscape of meticulously crafted instrumentation.

A
transatlantic collaboration, the writing process started with Dave Gahan
and Soulsavers’ Rich Machin exchanging demos and ideas from their
respective studios in lower Manhattan and rural England. They then
recorded the album with additional musicians in studios around the
world, including classic locations such as Sunset Sound in Los Angeles
and Electric Lady in New York. The end result is a vibrant,
live-sounding album, and proof of the “instant and obvious fit” Machin
felt writing with Gahan.

To fully showcase the powerful, live
nature of the album, Dave Gahan & Soulsavers will bring the project
to life in a series of six special shows in iconic, intimate venues
across the US and Europe. Starting October 19th at the first show in Los
Angeles, Dave Gahan & Soulsavers will perform as a ten-piece band,
with shows in New York, London, Berlin, Paris and Milan to follow.
Tickets for all shows will go on sale September 18th and select shows
will be broadcast and streamed for fans worldwide. Full dates and venues
are listed below.